Currently, a number close to three million Syrian children are out of school and aren’t receiving any type of formal or informal education. Many children are part of families who have left Syria and gone to neighboring countries, making schooling even more difficult. Out of all international humanitarian aid, only a mere 2% is given to funding education. Pearson, a global education publisher, is spending around $1.5 million dollars to help solve Syria’s refugee education crisis. In addition, Pearson spent almost $800k on two education centers in Amman, Jordan, which are run by Save the Children. According to Amanda Gardiner, vice president of sustainability and social innovation at Pearson, the need for education “is enormous. Access to schooling is not the only issue – the quality of education has declined as a result of overcrowded classrooms, curriculum complexities, cultural barriers and other challenges. Absorbing the influx of refugees has been an immense struggle for Syria’s neighbors.” Finding enough teachers for the large amount of students proves just as challenging. Rob Williams, chief executive of War Child UK, says that “Children in Jordan’s Zaa’tari refugee camp have told us about classes with 120 students and one teacher. Some families might be motivated enough to find $1 to send their children to school if there was a private one” Children desperately need schooling, and the long-term impact of Syrian children never returning to school or receiving education has been estimated at 5.4% of Syria’s GDP, according to Save the Children. 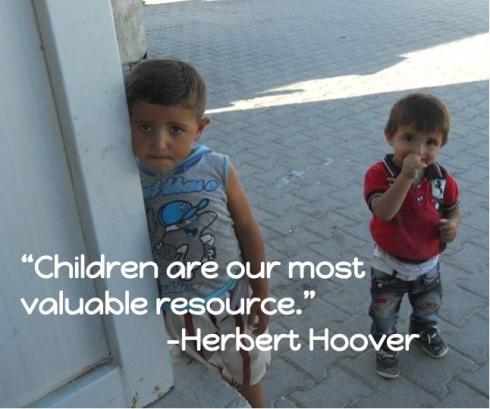 For many refugee children, surviving is life, and having fun is not part of life. Zakira, a charity that means “memory” in Arabic, paired with UNICEF to give Syrian and Palestinian refugee children disposable cameras and photography lessons. This helps to give children a taste of childhood. “These young photographers do not try to show the misery of their life in the settlements nor do they make any kind of statement. They merely capture pictures of the world around them and the intimacy of their daily life with a stunning genuineness,” according to Zakira. These photos not only allow an outlet for the children, but serve as a perspective to see life in a refugee camp from the point of view from a child.

In Istanbul, Turkey, a new psychological therapy and rehabilitation center opened in June. Turkey. Almost 1.8 displaced have sought refuge in Turkey. Syrians center will use psychotherapy, art therapy, as well as other therapies to help children and their mothers. The project is led by Muntada Aid and the Alliance of international Doctors. Children who experienced war often need psychological treatment, yet an estimated 2 million Syrian refugee children do not receive help. Regarding the motivation to open the center, the director of the Alliance of International Doctors, Mevlüt Yurtseven, stated “Syrian children underwent the most severe trauma during the war and they aimed to help them to recover.” The center hopes to reach out and help many of the Syrians who fled their country four years ago and came to Turkey.

Read more at the article here.

Over 240 Syrian refugee families have been living in a town’s former prison in Kurdistan. This prison also used to house Saddam Hussein. Every week, children who live in the prison gather and paint murals onto the walls. The bright murals not only improve the bleak atmosphere of the prison walls, but serve as a creative outlet for refugee children in the camp.The children are encouraged to bring their own drawings to serve as inspiration for the mural they paint. Focusing on positive imagery rather than bad experiences allows for focus on the future. The children were asked to paint pictures of their hopes and dreams. Castle Art, an NGO, supported the children’s creation of artwork in a healing way.

Read more about this here.

Malala Yousafzai wrote an essay for The Telegraph, and talked about launching a new campaign entitled #BooksNotBullets, in an attempt to promote education and equal living around the world. Still completely humble, when confronted with the notion of being special she was confused.’ Am I unique because I’m a girl who was stopped from getting an education? Because that is also true for over 60 million other girls around the world.’ She spoke about the importance of unity, and how powerful people can be when united. In reference to the millions of Syrian refugees without education, she explained that ‘being a refugee is no excuse to learn less. On the contrary, it is a motivation to learn more. Their situation could not, and should not, be an excuse for them to receive less than their right — a quality primary and secondary education.’ She urged ‘world leaders to choose books over bullets,’ and explained that every girl can be reached with the power of education. Malala turned 18 years old just last month.

You can read the full article here.

Young Somali Children living in a Refugee camp in Kenya write letters of hope to refugee children in Syria. “Be the stars and the new presidents,” said one young Somali boy in his letter. They offer encouragement, advice, and urge them to do everything they can to get an education and keep learning.   Read the article and their letters here. 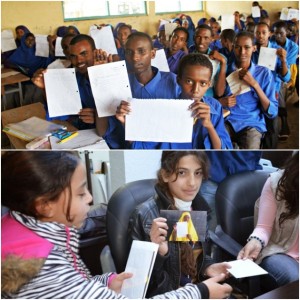 Syrian children living in the Zaatari Refugee Camp in Jordan give their perspective on the things that have happened and difficulties they’ve faced. They dream of going back to Syria and becoming anything from a doctor to a lawyer who protects human rights. Watch the full video here.